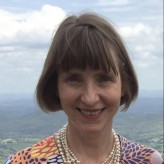 Jackie Mills is a Registered Dietitian Nutritionist who specializes in writing and recipe development for health advocacy groups, food companies, supermarkets, and publishers. She earned bachelor’s degrees in dietetics and journalism, both from the University of Kentucky, as well as two master’s degrees, in food science from the University of Maryland and in mass communications from Arizona State University. She is the author of 1,000 Diabetes Recipes (Wiley, 2010) and The Big Book of Diabetic Desserts: Decadent and Delicious Recipes Perfect for People with Diabetes (American Diabetes Association, 2007). She has served as project editor and writer for 18 Weight Watchers cookbooks and as the writer of Cooking Light Power Foods for Diabetes Cookbook (Oxmoor House, 2015).

Simple and Easy How often have you had this thought? I’d really love to make…